OSCA has a number of awards which recognise the outstanding alumni in our community. 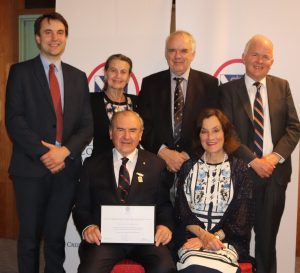 Honorary Life Membership is a significant honour bestowed on those whose commitment to the association has been of the highest level.

Click on the link below for information about membership criteria and the nomination process. 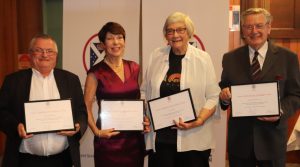 A Merit Award is bestowed on those whose commitment to an OSCA club or society has been, in the view of its members, of an outstanding nature.

The 2019 recipients of the Merit Award were James Robinson (’83) – OSFC,  Jan Goldsmith – past parent & OSMaD, Gwen Adams – past parent and OSFS and John Christensen (’57) – Bellarine Branch.

Click on the link below for information about membership criteria and the nomination process.

The Perelberg award honours the memory of Ashley Perelberg from the Class of 1992, who tragically died of a heart attack at the age of 18 in his first year of university study. Ashley exemplified Scotch spirit throughout his full and enthusiastic involvement while a student at Scotch. 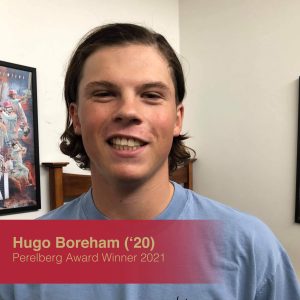 The Perelberg Award has been presented annually since 1993. It is granted in each alternate year to a current student or to one who left in the previous year, or to an Old Scotch Collegian. The key criterion is that the recipient has shown “exemplary Scotch Spirit”.

Ashley’s family presented a silver sculpture depicting the penguin parade at Phillip Island, which was inspired by Ashley’s devotion to the annual Scotch-at-Cowes summer camps on Phillip Island.

The recipient of the 2021 Perelberg Award is Hugo Boreham from the Class of 2020.

Both within and away from Scotch, Hugo devotes himself to helping others in any way he can. In 2020, during the extended school lockdowns, Hugo produced his own podcast, “Chomper’s Champions” interviewing Scotch boys and teachers. This podcast provided boys from Years 7-12 with a source of entertainment during an otherwise challenging and isolating period, and provided a common topic for boys to chat about during the week. He was also instrumental in the school’s “Not Weak To Speak” campaign last year, and took great pride in travelling up to Tiwi with the Indigenous Partnership Program, something he forever deems “the best week of [his] life.” He also continues to be actively involved with the Young Old Boys.

Continuing the thread of wanting to help others, away from school Hugo volunteers his time as a football and cricket coach at the respective Richmond Clubs, where he coaches young kids who otherwise would have little guidance, other than from a parent.

Congratulations to Hugo on this well-deserved award.